What does the “Castle life” look like at Lassay Castle? Interview of the owner

Castle life at..., Life in a Castle

Cecilia de Montalembert, who lives at Lassay Castle (between in Mayenne, Brittany and Normandy), has kindly accepted to answers to our questions. Discover her interview.

What is the link between your family and Lassay Castle?

My husband has always lived in the privacy of Lassay stones, the fortress being in his family since the restoration (1823). Similarly, our three children are imbued from birth by the atmosphere of these places they have ever attended. However, we have taken over the house in 2014, following a family sharing.

What is the history of the castle? What are the main historical events?

The first castle of Lassay was built by the Baron de Mayenne in the late XIth century or early XIIth  century to resist to the pressure from its powerful neighbor, the Duke of Normandy, whose father had just conquered a part of Great Britain.

During the Hundred Years War, the alliance of Charles de Vendome, lord of Lassay, with the British, entails the dismantling of the castle by King Charles VII. After the Hundred Years War, his descendant Jean II de Vendôme is allowed to rebuild, following his marriage to the widow of Gilles de Rais, Catherine de Thouars. It’s at that time that the castle takes on its present form with its eight large towers surrounding a small extent polygonal court.

After 1592, the role of Lassay as stronghold was over. The castle became a residence and underwent some transformations intended to make it more habitable. In 1600, the lordship of Lassay is allocated by auction to Charlotte du Tillet. Important figure in the court of Henry IV, she was the mistress of the Duke of Epernon who was in the king’s carriage during his assassination by Ravaillac. He had stayed with her some time ago.  When she died, her testament will be attacked and the lordship of Lassay, put out to tenders, will be taken by Isaac de Madaillan in 1639.

The 5th Marquis of Lassay will be Louis-Félicité de Brancas-Lauragais, nephew of Leon Madaillan (who was owner of Lassay and lover of the Duchess de Bourbon, daughter of Louis XIV and Madame de Montespan). He had close ties with the Encyclopedia sphere, member of the Academy of Sciences, he produced the first porcelain with hard paste with kaolin in the region of Alençon. The Sèvres Museum holds some pieces. Friend of Lavoisier, he paid the diamonds Lavoisier used to demonstrate that diamond was carbon. Under the Directory, he sold the Marquisate of Lassay to Mr. Pierlot, who sold it in 1823 to the Marquis of Beauchesne, ancestor of the current owners.

In 1836, Victor Hugo passing through the area with Juliette Drouet, wanted to visit the castle of Lassay. He was probably wearing unusual clothes because the concierge forbidden him to enter in the castle alleging that his master had forbidden him to let beggars enter… Nevertheless, the poet made a beautiful sketch of the castle.

Castle Lassay ceased to be inhabited in the early twentieth century, when the Marquis of Beauchesne, in order to give the fortress its medieval simplicity of origin, ordered the destruction of a Louis XIV wing built by Louis Madaillan above the barbican. In this way, he destroyed bedrooms and living rooms and made the castle much less easy to live.

It was only in the late 70s that his descendants Montalembert, ignoring the discomfort of the place, undertook a basic arrangement work in order to live in.


What does this castle represent to you?

Maintaining and safeguarding Lassay are for us a total commitment in which we put all our thoughts, our means, our time. We feel fundamentally responsible, with regard to the generations that preceded us as much as the inhabitants of Lassay for who the castle is an essential identity element.

“A total commitment in which we put all our thoughts, our means, our time”

The castle has been weakened by time and requires a lot of work to pass this generation. As soon as we got the property, we have launched very significant restoration operations, which must continue for years if we manage to secure funding.

According to you, what is “castle life” nowadays?

A fortress like Lassay was not designed to live in. So it’s not a classic example of “castle life”. The structure itself of the building already makes it difficult to compare it with residential castles: it is in fact made up of eight independent towers with one room per floor. To move from one tower to another you must go out and cross the courtyard. Thus in summer like in winter, we always know the weather. We regularly have to take an umbrella to go to bed after dinner!

“We regularly have to take an umbrella to go to bed after dinner!”

So it is a life very close to nature, in contact with the raw stone and an entire ecosystem with which we cohabit in harmony: bats, spiders, owls … However, it is a struggle every moment against pigeons, which mercilessly degrade our roofs, carpentry and every corner where they can penetrate.

What do you organise at Lassay Castle?

The castle has been open to visitors since the 1930s. At that time, visitors could freely walk on the ramparts, without security. Now the tours are guided and allow visitors to understand both the history and the defensive structure of the castle.

We also organize various events, but still consistent with the place or its history; historical re-enactments, open-air theater, extreme sports (yes, using walls, towers, relief …) concerts, etc. You can find the program on Facebook and in the events of our page. 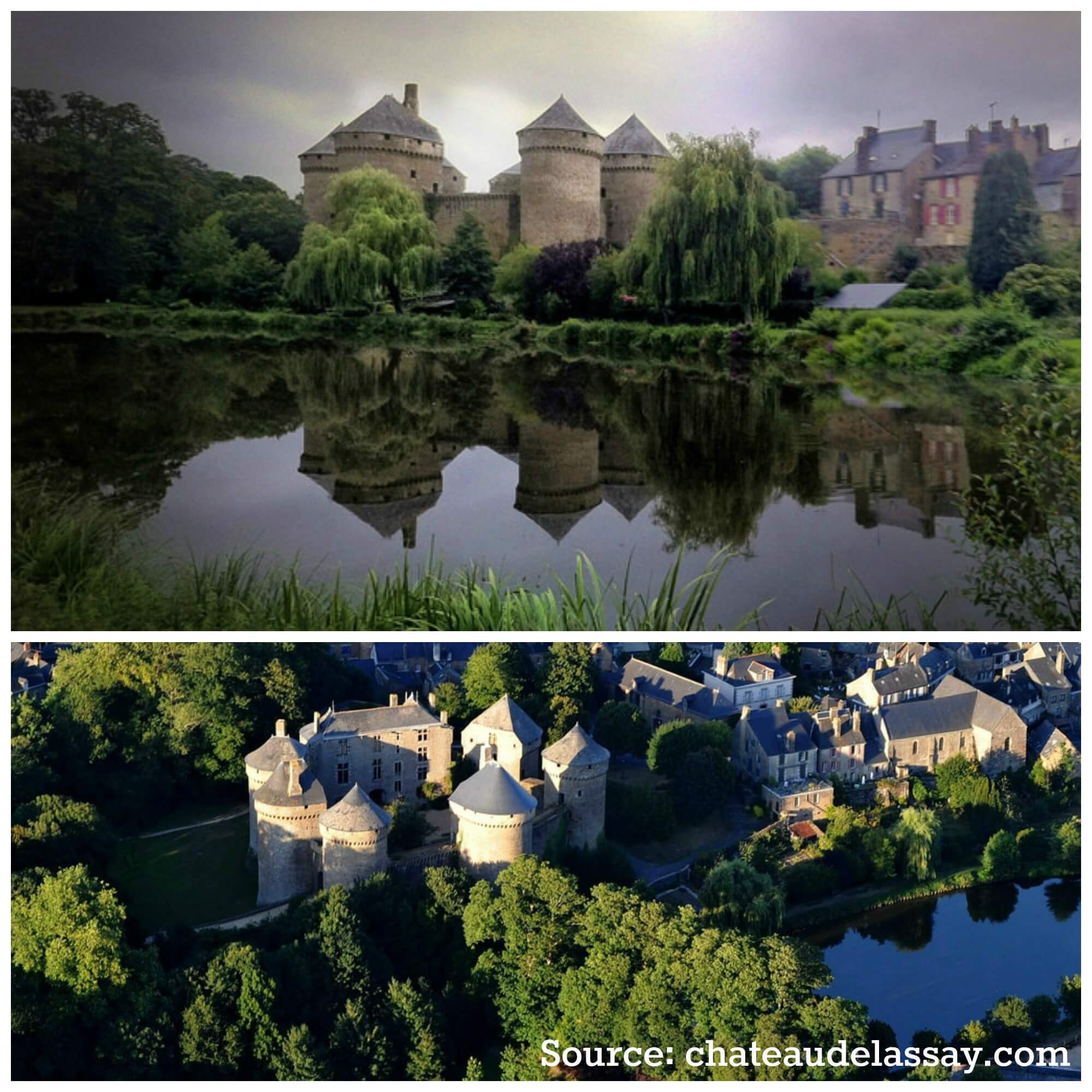 You have launched a crowdfunding campaign on Dartagnans, could you tell us more about it?

This crowdfunding campaign is over, it was a success, its goal has been exceeded.

Driven by the urgency since a part of all threatened to collapse, we began the complete restoration of the gatehouse. This substantial work, is planned in two tranches. A first crowdfunding campaign “Fous de patrimoine”, conducted with the support of the VMF foundation, was successful and helped to finance the first phase of work.

In order to achieve the second tranche and lead the operation to an end, funding needs are very important again, which is why we turned to Dartagnans (crowdfunding platform). The € 10,000 goal of this crowdfunding campaign could finance the dressed stone for the restoration of the ramparts of the East Tower and the central area of the gatehouse. We rely heavily on public support, without which our efforts for Lassay may cut short!

“We rely heavily on public support, without which our efforts for Lassay may cut short!”

How can we help you?

You can be a great help for us, expanding the circle of sympathy around Lassay and raising public awareness to our action. The element that seems essential to convey is that our project is not personal, but collective and that everyone can get involved and participate.

“The element that seems essential to convey is that our project is not personal, but collective and that everyone can get involved and participate.”

Thank you Cecilia for this interview!

Are you a castle owner? Would you like to be interviewed by Castellissim? Feel free to contact us!

Did you like this interview? Read all our interviews of castles owners here!

Are you a castles lover? Subscribe to our newsletter!

We use cookies to ensure that we give you the best experience on our website. If you continue to use this site we will assume that you are happy with it.Ok